Wednesday briefing: Trump is a ‘cheat’ and a ‘racist’ – Cohen 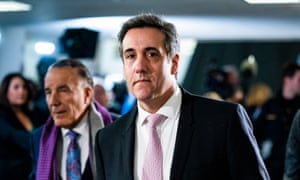 Top story: ‘I regret the day I said “yes” to Mr Trump’

Good morning briefers. I’m Martin Farrer and it’s my pleasure to bring you the news you can use this Wednesday morning.

Michael Cohen is to call Donald Trump “a racist”, a “conman” and a “cheat” in his testimony to Congress, according to a copy of his opening statement obtained by the New York Times. The president’s one-time lawyer, who will appear before a House committee later today, will claim that Trump knew during his presidential campaign that Roger Stone was talking to Julian Assange about a WikiLeaks drop of Democratic National Committee emails. According to the leaked statement, Cohen will add: “Never in a million years did I imagine, when I accepted a job in 2007 to work for Donald Trump, that he would one day run for president, launch a campaign on a platform of hate and intolerance, and actually win. I regret the day I said ‘yes’ to Mr. Trump. I regret all the help and support I gave him along the way.” You can find out more about the Cohen statement and follow all the reaction and developments at our live blog.

The sensational development came hours after Trump arrived in Hanoi for his second summit meeting with North Korean leader Kim Jong-un. The US president is scheduled to hold a one-on-one with Kim at 11.30GMT today.

It was a busy night elsewhere in US politics. The House of Representatives voted overwhelmingly against Donald Trump’s declaration of a national emergency at the US-Mexico border. The measure will now go to the Republican-led Senate where only a handful of defections could result in a stinging rebuke to the president’s prestige. And congresswoman Alexandria Ocasio-Cortez says Ivanka Trump can’t criticise the Democrats’ Green New Deal jobs plan because she has never had to “work for wages”.

Remainer revolt – Theresa May has agreed to give MPs a vote on delaying Brexit after bowing to pressure from pro-remain cabinet ministers. In a move that has incensed pro-Brexit Tories, the prime minister was forced to give ground after a stormy cabinet meeting which saw Philip Hammond and Amber Rudd urge her to seek an extension to the Brexit trigger of article 50 or face mass resignations from the frontbench. The next meaningful vote on May’s Brexit deal will now be held by 12 March, she told the Commons. If it is defeated again, it will be followed by a vote on 13 March on leaving with no deal. If that is defeated there will then be a vote the next day for an extension to article 50. Amid the swirl of manoeuvres at Westminster, an official government report has revealed that the UK economy could shrink by 9% in the event of a no-deal Brexit and also result in higher food prices. And Rafael Behr writes in his column this morning that the likely extension of article 50 shows more clearly than ever that there will never be a “clean Brexit” of the kind dreamed about by leavers.

Fatal stabbing – A man has been stabbed to death at Ilford station in east London in the fifth fatal knife attack in the capital in the past nine days. The victim, believed to be in his 20s, was attacked at around 8.30pm last night. The Metropolitan police have launched a murder inquiry but no arrests have yet been made. It follows recent stabbing deaths in Camden, Brixton, Wood Green and Tower Hamlets.

Food for thought – The threat of higher grocery prices post-Brexit is thrown into even sharper focus by our exclusive story about a government plan to introduce a food security index to measure how often low-income families skip meals or go hungry. The reform has been demanded by anti-poverty campaigners for several years and aims to gather a more accurate picture of the extent and causes of hunger in the UK.

Off track – Britain’s long-suffering rail passengers are paying the price of costly mismanagement by the Department of Transport, according to damning report by MPs published today. Travellers faced another “difficult year” beset by more timetable changes and engineering work, the public accounts committee warns, and lays the blame on “strategic mismanagement” by the DoT. It follows “unacceptable levels of disruption” last year that prompted transport secretary Chris Grayling to order a review chaired by former British Airways boss Keith Williams. Increasing pressure on the department, Williams made a speech on Tuesday night arguing that the current franchise system “cannot continue the way it is today”.

Pell plea – George Pell’s lawyer has dismissed one of the disgraced cardinal’s offences as a “plain vanilla sexual penetration case where the child is not actively participating”. Robert Richter told a pre-sentencing hearing in Melbourne today that there were “no aggravating circumstances” to the case as he tried to secure bail for his client. However, the application was withdrawn and the Australian cardinal will now go straight to jail. Pell, the most senior Catholic priest in the world to be found guilty of child sexual abuse, has also been sacked as the Vatican’s finance chief after the Melbourne court’s verdict was revealed on Tuesday.

Tail of the unexpected – There’s only place to end our roundup of the news this morning – Bensheim in Germany, where firefighters have rescued a rat so fat that it became stuck in a manhole cover. The rodent, plumped up by winter feeding according to animal rescuers, was pictured with its mouth open as if screaming for help after it managed to get trapped in the metal grate. It took a multi-agency effort to set it free.

The Guardian’s Dan Sabbagh and Conservative MEP Daniel Hannan explore whether the European Research Group is as influential as ever – or has it overplayed its hand on Brexit? Plus: Joanna Walters on the Sackler family and the US opioid crisis

Lunchtime read: The dogs that are too cute for their own good

The next time the small people in your life ask if they can have one of those cute little French bulldogs as a pet, you might want to show them this article about the sometimes cruel truth behind the trend for such brachycephalic breeds. In case you didn’t know, that’s the fancy name for flat-faced dogs whose popularity has soared thanks to owners (and wannabe owners) putting their pictures on social media. But while many people coo at the pics, the veterinary industry is fretting that the demand means the entrnchment of the breathing and eating problems common among “brachys”. One campaigner, Linda Goodman, says the fashion is “crucifying” the breeds. “People are still so set on having them that it kind of bypasses them that they are buying into cruelty,” she says.

Leicester’s new manager Brendan Rodgers ran the rule over his new charges as they secured their first home win since Boxing Day thanks to goals by Demarai Gray and Jamie Vardy. Maurizio Sarri has threatened to drop Kepa Arrizabalaga for Wednesday’s home game against Tottenham for the collective good of the Chelsea squad and has no regrets over losing his cool during the Carabao Cup final. Duanne Olivier is giving up a Test cricket career with South Africa – or a least placing it in cold storage – to sign a three-year deal at Yorkshire via the Kolpak ruling. Joe Root, on the eve of the fourth ODI against West Indies, has declined the option to rest for the three-match Twenty20 series that ends this Caribbean tour. Wales have suffered a blow to their hopes of securing the grand slam with news that the lock Cory Hill will miss the remainder of the Six Nations because of an ankle injury. And trainer Paul Nicholls paraded a dozen big-meeting contenders in the sunshine on Tuesday as he revealed that Frodon is now only 50-50 to go for the Gold Cup.

The retail industry has the highest redundancy rate of any sector of the British economy, a study says, as store closures at M&S, Debenhams and HMV take their toll. After a strong day for the pound yesterday in the wake of all that talk about delaying Brexit, sterling has been pretty flat overnight at $1.325 and €1.164. The FTSE100 is set to start the day down slightly.

It’s almost entirely Brexit news on the front pages today. The Times reports: “Cabinet war as MPs get chance to delay Brexit”, while the FT says: “May opens way for ‘short’ Brexit delay to appease pro-EU Tories” and the i has: “May hits the pause button on Brexit”. The Telegraph has a report that cabinet ministers have told May “Delaying Brexit is ‘a plot to stop it’”.

The Mail reports on the prime minister’s speech to Commons: “May: now do your duty”, as does the Express, which highlights May’s reference to the meerkat from the Comparethemarket TV advertisement: “Brexit? It’s ‘simples’ … back my deal”. The Guardian has: “Government: no-deal Brexit may cut UK economy by 9%”.

In other news, the Sun reports on a deportation case: “Brute farce” about a deportation case and the Mirror has a story about criminals who are being monitored by probation contractors killing more than 200 people: “Contract killers”.