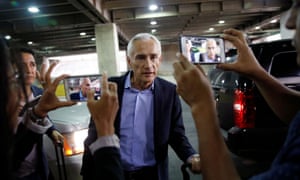 The Univision anchor Jorge Ramos and his five-person crew have been deported from Venezuela after they were detained in the presidential palace in Caracas during an interview with the embattled president, Nicolás Maduro.

The Mexican-born journalist said he and his crew were detained for two hours on Monday night after asking a question Maduro did not approve of.

The network’s US president Daniel Coronell said the team’s equipment as well as the material that upset Maduro were confiscated.

Ramos told Univision that Maduro took offence when the journalist showed the president images of Venezuelans eating out of the trash to prove people were living a humanitarian crisis.

On Tuesday, Venezuelan intelligence agents escorted Ramos and his crew to Caracas’s Maiquetía airport, where they left on a flight for Miami.

“They didn’t give us a reason” for the deportation, Ramos told reporters as he arrived at the terminal. “They just said to us last night that we had been expelled from the country.”

Ramos is arguably the best-known journalist in the Spanish-speaking world. He has gained particular notoriety for regularly locking horns with Donald Trump, who had him ejected from a press conference while on the campaign trail in 2015. The have since sparred over the US president’s proposed border wall among other contentious issues.

Maduro, who is fending off mounting international pressure to cede power to the opposition leader and self-declared interim president Juan Guaidó, has been accused of regularly detaining journalists. Last month, two French journalists were held after filming outside Miraflores. Numerous local journalists have been harassed or detained in recent years.

Venezuela’s information minister, Jorge Rodríguez – who is regarded by analysts as Maduro’s chief propagandist – suggested Ramos was a state department stooge in a tweet. “We do not lend ourselves to cheap shows,” he went on to say.

Maduro had until recently favoured interviews with friendly outlets, but in the last month has sat down with more aggressive reporters from the BBC and Eurovision, while an ABC crew also interviewed him on Monday.

The move against Ramos drew swift condemnation from Human Rights Watch, with the advocacy group’s Americas director, José Miguel Vivanco, calling for the immediate release of Ramos and his crew.

“The international community must be alert,” he tweeted on Monday evening, later adding that “Jorge Ramos and his team are surrounded by Maduro’s intelligence services (responsible for atrocities).”

Guaidó also attacked Maduro, tweeting that “the desperation of the usurper is each day more evident, he could even respond to [Ramos’] questions.”

The Mexican president, Andrés Manuel López Obrador, has drawn criticism from some international observers for refusing to back Guaidó.

The Mexican foreign ministry condemned the crew’s detention after their release on Monday night. “Our country calls for respect for freedom of expression and reiterates its obligation in defense of the security of Mexican citizens abroad,” a tweet read.

Univision is the largest Spanish-language network in the US. Ramos anchors its flagship nightly news program, Noticiero Univision.

We made a choice…

… and we want to tell you about it. Our journalism now reaches record numbers around the world and more than a million people have supported our reporting. We continue to face financial challenges but, unlike many news organisations, we haven’t put up a paywall. We want our journalism to remain accessible to all, regardless of where they live or what they can afford.

This is The Guardian’s model for open, independent journalism: free for those who can’t afford it, supported by those who can. Readers’ support powers our work, safeguarding our essential editorial independence. This means the responsibility of protecting independent journalism is shared, enabling us all to feel empowered to bring about real change in the world. Your support gives Guardian journalists the time, space and freedom to report with tenacity and rigour, to shed light where others won’t. It emboldens us to challenge authority and question the status quo. And by keeping all of our journalism free and open to all, we can foster inclusivity, diversity, make space for debate, inspire conversation – so more people have access to accurate information with integrity at its heart.

Guardian journalism is rooted in facts with a progressive perspective on the world. We are editorially independent, meaning we set our own agenda. Our journalism is free from commercial bias and not influenced by billionaire owners, politicians or shareholders. No one steers our opinion. At a time when there are so few sources of information you can really trust, this is vital as it enables us to give a voice to those less heard, challenge the powerful and hold them to account. Your support means we can keep investigating and exploring the critical issues of our time.

Our model allows people to support us in a way that works for them. Every time a reader like you makes a contribution to The Guardian, no matter how big or small, it goes directly into funding our journalism. But we need to build on this support for the years ahead.