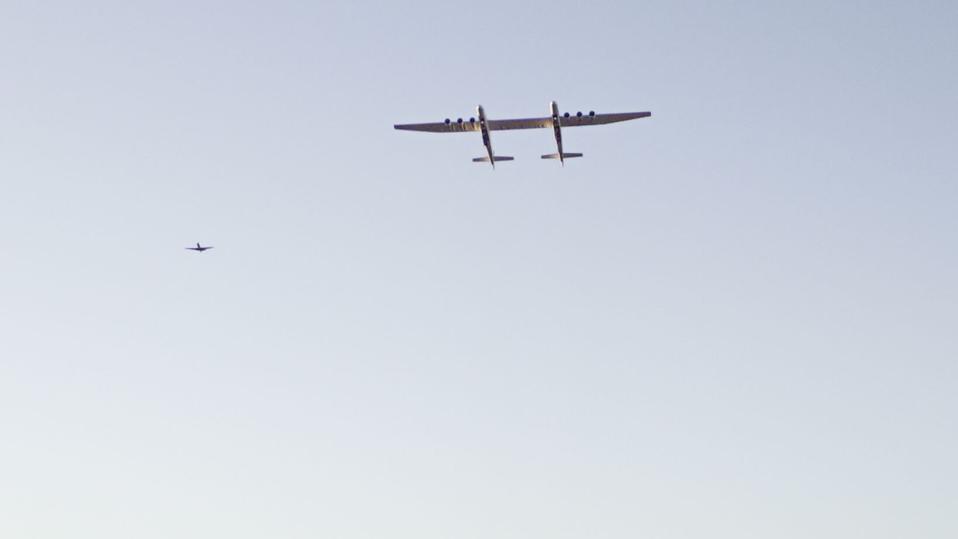 On Saturday, the world’s largest aircraft, the Stratolaunch, made its first complete test flight. The aircraft flew for about two and a half hours over the Mojave desert, reaching a speed of 189 miles per hour and an altitude of 17,000 feet.

The aircraft was created by the Stratolaunch Systems Corporation, which was founded by the late Paul Allen. The purpose of the plane isn’t normal commercial travel, but rather to carry rockets into high altitudes, then launch those rockets from the plane itself.

“What a fantastic first flight,” Jean Floyd, CEO of Stratolaunch, said in a statement. “Today’s flight furthers our mission to provide a flexible alternative to ground launched systems.”

Scaled Composites, which was acquired by Northrop Grummon in 2007, worked on the design and build of the Stratolaunch aircraft. Saturday’s test flight was piloted by Scaled Composites test pilots Evan Thomas and Chris Guarente.

“I honestly could not have hoped for more on a first flight especially of an airplane of this complexity and this uniqueness,” Thomas said in a press briefing following the flight.

The Stratolaunch aircraft was first announced in 2011, and is the largest plane ever built out of composite materials. Its wingspan is 385 feet, the longest of any aircraft that has ever flown, including the Spruce Goose, which had a wingspan of about 320 feet. By comparison, a Boeing 747 has a wingspan of about 212 feet – making the Stratolaunch plane nearly twice the size. It’s propelled by six PW4056 turbofan engines, and is actually capable of launching multiple rockets on a single flight, up to about 500,000 pounds.

Airplane-launched rockets seemed at one point to be a good bet as a way of providing more convenient flights into space. Scaled Composites won the Ansari X Prize for launching the first private, reusable spacecraft into space in June of 2004. That effort was backed by Paul Allen, and this approach was not only adopted by Stratolaunch but also by Richard Branson’s Virgin Galactic.

However, it’s taken much longer than expected to develop these types of spaceflight. Virgin Galactic only first reached a space-approaching altitude at the end of 2018 – 14 years after that first Scaled Composite flight – though it hopes to be providing passenger service as early as later this year. Stratolaunch at one time was developing a rocket for its aircraft, but abandoned that effort earlier this year.

Rather than launch its own rockets, Stratolaunch has shifted strategy to be a platform for other aircraft-launched rockets. In particular, for Northrop Grummon’s Pegasus family of rockets. First demonstration Pegasus flights off of the Stratolaunch plane are scheduled for 2020.

Though they’ve taken longer to develop, the arrival of private plane-launched rockets via Virgin and Stratolaunch may be well-timed, as more satellite startups are looking for options to get satellites into space on their own timetable. Rockets launched from airplanes have more flexibility in terms of timing than their counterparts that launch from the ground, which may be a critical factor for companies looking to build up constellations in a hurry.