Hotel double-booked as Hanoi scrambles to host Kim and Trump 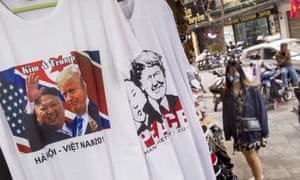 In one of the more awkward double bookings in diplomatic history, the Hanoi hotel that was supposed to serve as a headquarters for the US press corps had also been reserved by one of the world’s most press-averse and security-fixated dictators, Kim Jong-un.

Such cohabitation was never going to work for the North Korean security apparatus, which is not accustomed to dealing with inquisitive journalists. Kim’s bodyguards have been known to accost reporters they suspect of having taken pictures of the leader and demand they hand over their smartphones for scrutiny.

After a brief discussion between the North Korean and Vietnamese officials in Hanoi’s Melia Hotel on Tuesday morning, the US journalists were unceremoniously evicted from the media centre that the White House advance teams had spent days erecting.

The fact that the problem was only discovered on Tuesday, the day before Kim is due to meet Donald Trump in the Vietnamese capital, said a lot about the haste with which this second summit between the two leaders has been arranged. Hanoi was agreed as a venue two weeks ago, a win for the North Koreans who wanted to combine the trip with a relationship-building session with the Vietnamese leadership. The Trump administration had wanted to meet in the coastal resort of Danang.

Very few details about the timing and location of the summit have been released so far, other than that Trump and Kim – who both arrived in Hanoi on Tuesday – will have a brief one-on-one encounter on Wednesday evening followed by a working dinner with top officials. Their Vietnamese hosts will put on entertainment, possibly in the French colonial-era opera house in central Hanoi.

A government guesthouse has been made available for working talks on Thursday, the duration and timing of which remain uncertain, but there may also be talks in the Metropole Hotel, where Graham Greene wrote The Quiet American and where Jane Fonda stayed when she made a wartime visit to North Vietnam in 1972.

Given the warmth of the relationship Trump claims to have developed with Kim, and the very many unanswered questions about how and whether North Korea will disarm, it is unclear why the two leaders have put off their first meeting until Wednesday evening.

By then, Kim will have been in town for more than 24 hours after a 65-hour ride from Pyongyang in his personal armoured train. Like his father, Kim Jong-il, the North Korean leader tends to avoid air travel, apparently for security reasons. The Chinese government flew him to the first summit with Trump in Singapore last June, but according to South Korean diplomats Kim has since decided that appearing to depend on China for transport is at odds with the regime’s philosophy of self-reliance. North Korea’s answer to Air Force One, an old Ilyushin, has not been tested over a long distance for some years.

After lumbering across China at a top speed of 38mph, Kim’s green train stopped at the Vietnam border town of Dong Dang on Tuesday morning, where a red carpet had been rolled out and was flanked by Vietnamese soldiers in white ceremonial uniforms. Kim, his younger sister, Kim Yo-jong, and their entourage disembarked and the North Korean leader climbed into a stretch Mercedes limousine, which drove off with six bodyguards jogging on either side, the 35-year-old despot waving through a half-opened window.

The jogging cordon accompanied the Mercedes out of the centre of Dong Dang, leaving it to drive the rest of the way to Hanoi escorted by Vietnamese motorcycle police. The 100-mile stretch of road was closed to other traffic for most of the day, as was the centre of Hanoi for Kim’s arrival. Spectators clutching Vietnamese, North Korean and US flags crammed the pavements in the old district for the last leg of the journey, where the motorcade was accompanied by an armoured car with a machine gunner perched on the top.

Trump arrived on Tuesday night on Air Force One after refuelling stops at RAF Mildenhall in the UK and Qatar. Thousands of people, some holding bunches of flowers and Vietnamese flags, turned out to watch his motorcade drive along a dark and closed-off highway into the capital.

He is due to meet the Vietnamese president, Nguyen Phu Trong late on Wednesday morning. After lunch with Vietnamese officials there is then another long vacant space in Trump’s diary until his face-to-face with Kim in the evening. No meetings have been scheduled for Thursday, but it is assumed that is when the business of the summit will be done.

Trump has said he would be happy enough if North Korea sticks to its moratorium on nuclear and missile testing, and his spokeswoman, Sarah Sanders, has said the fact that the two leaders are meeting for a second time is a success in itself.

Any further progress – perhaps a declaration aimed at formally ending the state of hostilities that is still in force since the 1950-53 Korean war, establishing mutual liaison offices, or more North Korean steps to dismantle its nuclear weapons infrastructure and open up its facilities to international inspection – would be a further sign that the US and North Korea are stepping away from the nuclear brink.

Hanoi, once bombed daily by the US during the Vietnam war, has eagerly embraced its identity as the “City for Peace”, proclaimed by hastily printed billboards and banners around the city.

Truong Thanh Duc, a 56-year-old shopkeeper in Hanoi’s Old Quarter, had printed hundreds of T-shirts of Kim and Trump, with one featuring a stylised likeness of the North Korean leader against a white background, and another showing Trump and Kim’s faces and the words “peace” and “Hanoi 2019”.

“In my viewpoint, Mr Kim and Mr Trump are two great men,” he said, adding that he thought both men were willing to “sacrifice” for their countries in the name of peace.

At a salon across town, Le Tuan Duong, a barber, has been offering novelty Kim and Trump haircuts, and has transformed 400 men into lookalikes since last week. Most had been Kims, he said, though there were also a few Hanoians walking around town with a blond Trumpian shock on their crowns.

Both men were admirable role models, the hairdresser said. “These two leaders, they love peace.”

We made a choice…

… and we want to tell you about it. Our journalism now reaches record numbers around the world and more than a million people have supported our reporting. We continue to face financial challenges but, unlike many news organisations, we haven’t put up a paywall. We want our journalism to remain accessible to all, regardless of where they live or what they can afford.

This is The Guardian’s model for open, independent journalism: free for those who can’t afford it, supported by those who can. Readers’ support powers our work, safeguarding our essential editorial independence. This means the responsibility of protecting independent journalism is shared, enabling us all to feel empowered to bring about real change in the world. Your support gives Guardian journalists the time, space and freedom to report with tenacity and rigour, to shed light where others won’t. It emboldens us to challenge authority and question the status quo. And by keeping all of our journalism free and open to all, we can foster inclusivity, diversity, make space for debate, inspire conversation – so more people have access to accurate information with integrity at its heart.

Guardian journalism is rooted in facts with a progressive perspective on the world. We are editorially independent, meaning we set our own agenda. Our journalism is free from commercial bias and not influenced by billionaire owners, politicians or shareholders. No one steers our opinion. At a time when there are so few sources of information you can really trust, this is vital as it enables us to give a voice to those less heard, challenge the powerful and hold them to account. Your support means we can keep investigating and exploring the critical issues of our time.

Our model allows people to support us in a way that works for them. Every time a reader like you makes a contribution to The Guardian, no matter how big or small, it goes directly into funding our journalism. But we need to build on this support for the years ahead.